The Elephant in the Room: Addressing Homosexuality in the Black Community

Newly-placed billboards in the Albany, New York area have created quite a stir within the black community. They depict a black man standing with a clergyman with the statement, “I am gay and this is where I pray.”  Many churches are up in arms about the ads and are demanding they be removed.  But the truth is gay men and women have been a part of the black church for generations.  Unfortunately, too many ministers in the black church who react with indignation toward this issue are failing to offer real solutions.  I should know.  As an African-American male, I struggled with homosexuality most of my life.  And it pains me to say that I had to attend a racially-mixed church to find help.  Even despite recent headlines of prominent black leaders being accused of same-sex relationships, the black Church refuses to address the challenges and problems its members have with sexual orientation.  We have adopted a “don’t ask don’t tell” approach to a problem that continues to surface and, unfortunately, will not go away.

Don’t get me wrong. Homosexuality is certainly discussed in the Black Church today, but mostly with condemnation.  This only causes fear and shame in those who may be struggling, ultimately preventing them from seeking help within the church.  As a result, African-American women continue to be one of the fastest-growing groups of newly-infected HIV patients. This growing problem exists because the African-American community continues to turn its head to the fact that we have many black men who profess to be straight when, in reality, they are bisexual or just confused about their sexuality.  Spiritual resources that address their struggles with sexual orientation while maintaining their sense of dignity are almost non-existent.

For generations, the black man’s identity and self-awareness were developed and defined by his sexual prowess.  When I was growing up, I had an early understanding that boys who were known to be sexually-active with lots of girls were considered more masculine, and every young boy wanted to be like them.  If you had not been sexual with many girls, you would be teased and called derogatory names.  Though sex outside of marriage was considered wrong, young men would get a pass with meaningless statements such as “boys will be boys.”  These are the rites of passage for young black males.

I believe one of the main reasons the Black Church has not dealt with homosexuality on a large scale is that you have to first acknowledge sin before you can address it.   And simply admitting homosexuality exists is emotionally troubling for the Black community because it would require a new definition of manhood for the African-American male.  Manhood is not defined the same in all cultures. Homosexuality has existed for years within the white community, but the difference is that a gay white man is still considered a man if he has wealth and power because masculinity is defined by wealth, power and education within the White-Euro community.  These options do not exist as easily within the black community.  Since the days of slavery, black men have proven their manhood by producing children – many children.  The black man was highly-prized if he was able to create many babies.  And even today, that assumption continues to live on in the sub-consciousness of the black community.  The media plays into that mindset by stereotyping black males as hyper-sexual.

So what can the Black Church do to combat this growing problem? I think, as Christians, it is important that we let the gay community know that, though we don't agree with their beliefs, we love them and God loves them.  I am living proof of the mercy and grace God offers to people regardless of their sin. I think the church has felt that if they love the homosexual unconditionally that it means they are accepting the sin.  That’s simply not the case. God loves us all unconditionally.  While we were yet sinners, He sent His only son Jesus to die for us.  He didn’t wait for us to become right before He loved us.  He loved us while we were at our worst.

Black men need to be honest and compare the false definitions of manhood given to us by society to God’s definition of manhood.  Our women need to be healed of rejection and abuse that stem from past relationships.  Sex within a marriage, as God designed it, is a giving of one spouse to the other that is not only physical, but an exchange of the spirit and the soul.  When the church can be honest and discuss the struggle within its walls –whether it be porn addiction, adultery or homosexuality-- then it can start to reach a world that is sexually broken. We, as Christians, need to realize that God’s holiness and greatness is not undermined by our weakness.  His strength and power is certainly not fueled by our goodness.  We need to get honest and stop pretending we have it all together.  He doesn’t need us to be God, but we need Him.  He is the great restorer. 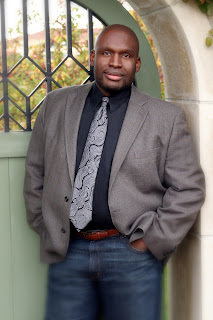 Shawn Derritt is a counselor, a worship leader, an award-winning singer/songwriter and author.  Through Christ Inner Healing Ministries, Shawn and his wife Saskia minister to others through music events and speaking engagements (www.christihm.com or www.shawnderritt.com).

Email ThisBlogThis!Share to TwitterShare to FacebookShare to Pinterest
Labels: homosexuality